Game Maker really has transformed and evolved over the years, but I have a true nostalgia for the early versions I first used, they had such an accessible charm with the simple drag and drop interface. What a magic way to first explore game design. Many thanks to Mark Overmars who developed the original Game Maker.

With a demo of TrueSpace 3 to render 3D sprites and a newly registered copy of Game Maker 6, the possibilities seemed limitless. ‘The Enemy Lines’ was my first ‘complete’ game, exclusively released on the Game Maker Community forums. 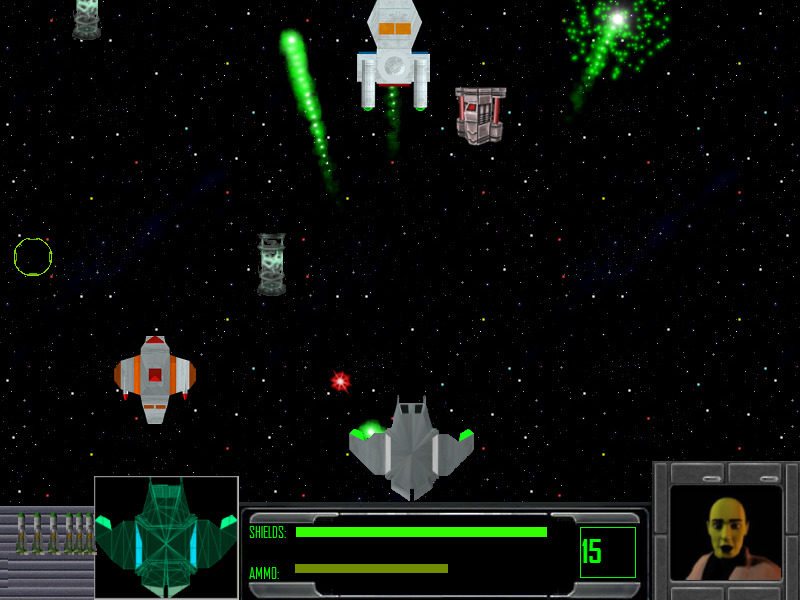 I remember wanting to make something exciting. Naturally, this meant lots of particle effects in a primitive top-down space shooter. I was 12 when I created this and I hadn’t learned any coding yet - this was programmed entirely with the drag and drop functions in Game Maker. 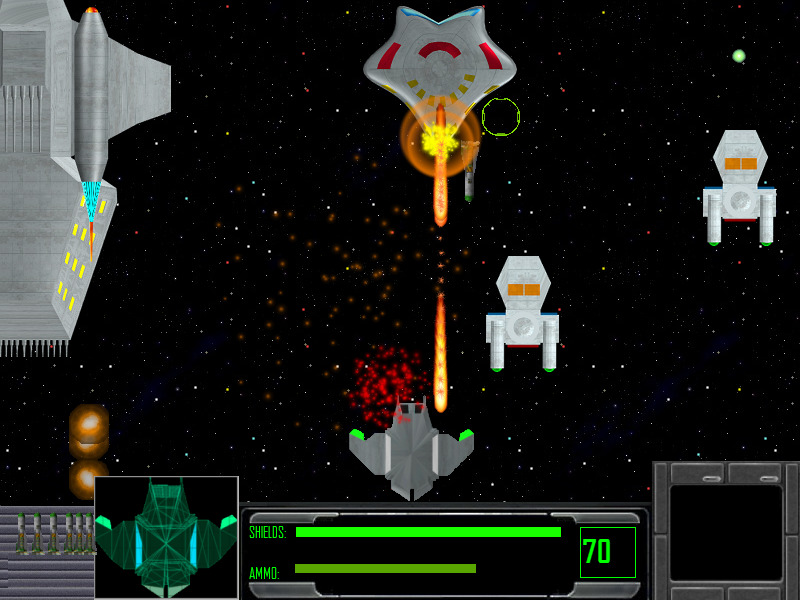 The jank was strong with this one. Players can only move in 4 directions and it’s very difficult to really tell what’s going on despite everything moving too slowly on screen. 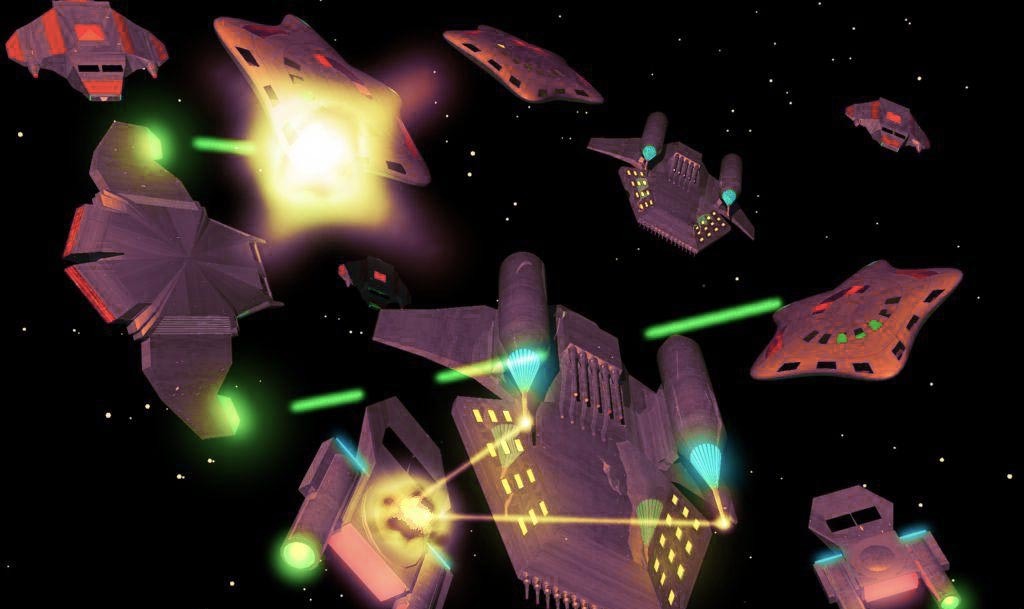 I enjoyed packaging this game up in a neat little .zip archive complete with promotional artwork (shown above) and misspelt HTML documentation with information about all the ships and even a bit of backstory. The readme.txt makes reference to the specific library computers at my school that had enough graphics memory to launch the game.

I made a small suite of creative programs for kids that featured a music sequencer, image editor and a drawing program. I’ve only retained a copy of the drawing program, FPaint. 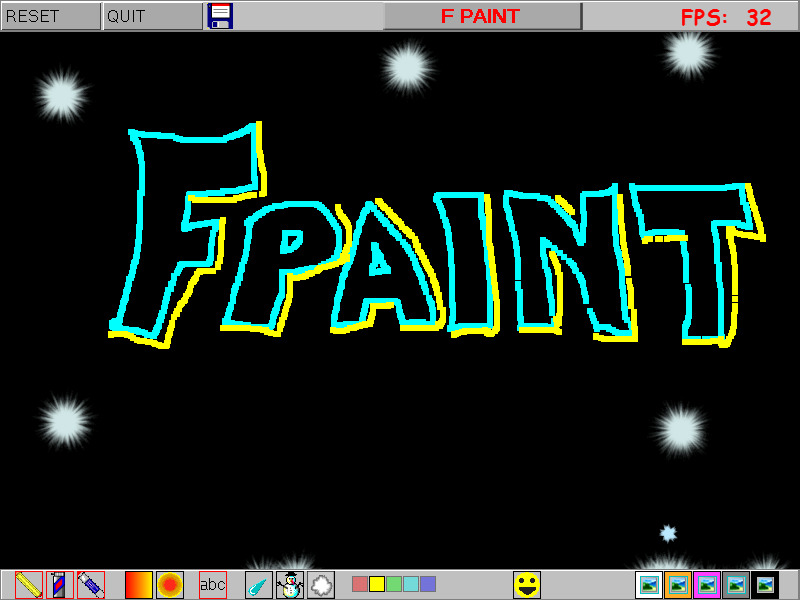 You can only draw in 5 colours. The main limitation of this program is I hadn’t yet figured out how to use actual drawing surfaces. Instead, every pixel drawn by the pencil is a separate object. Try and draw anything more complicated than the image above, and the FPS will drop below 30 even on a new computer. Pretty hilarious, in hindsight. 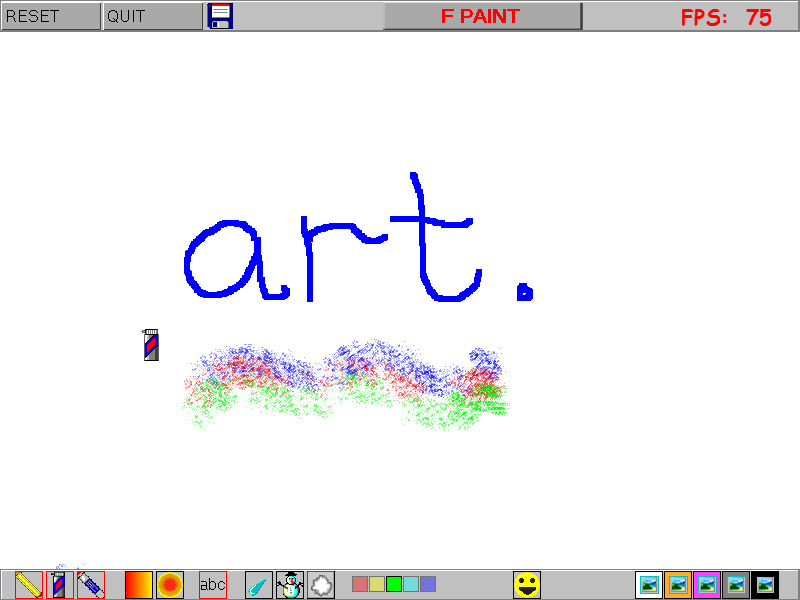 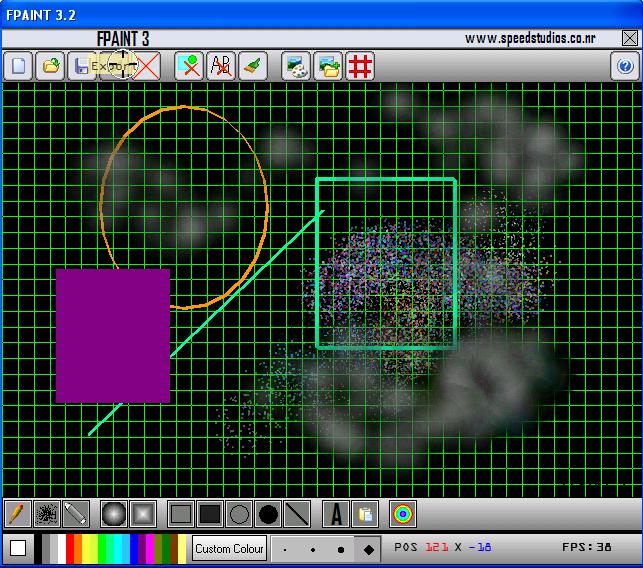 I also made updated versions of FPaint ending in 3.2. The later editions were a bit better and more similar to MS Paint. Does anyone still own a copy of these? I forgot to back them up.

My first GTA clone and a Frankenstein’s monster of ripped content. I used Evil Cookie’s fake-3D tutorial for the buildings, ripped screenshots from San Andreas for the vehicles and animated the pedestrians with Poser 4’s default models. 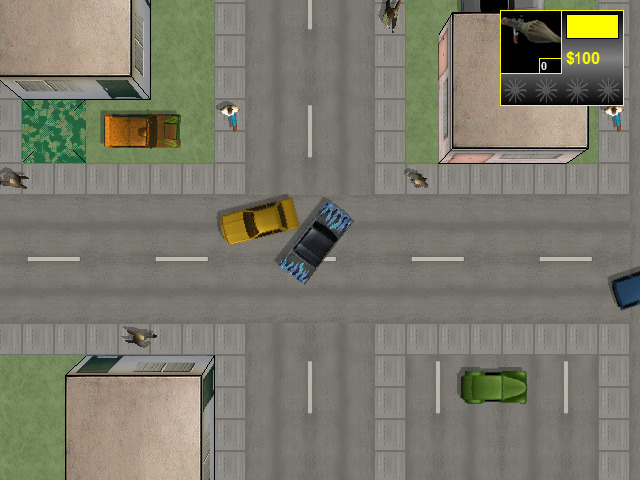 I created the whole thing in the space of one week. At the time, this was by far the biggest thing I’d made and I actually had to start figuring out logical solutions to problems during development. 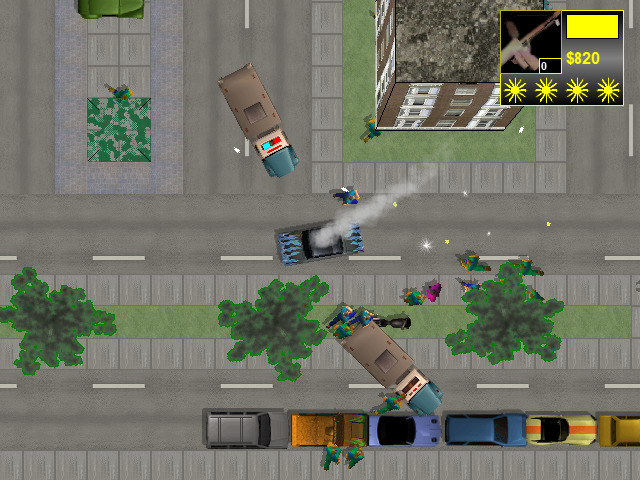 Released as a joke, I was actually surprised at its popularity within the Game Maker community. Many reviews correctly pointed out the numerous bugs and deficiencies. I was however pleased to have presented this novelty experiment - free-roam games made with Game Maker were still unusual.

Owing to the popularity of Boxville, I decided to make another GTA game I’d actually be proud of. Boxville only took one week; Pliston took six months. Pliston represents something of a 'leap forward' in terms of my learning how to make games. This time around, I fully utilised a 3D engine. I figured out texturing, converting and importing my own 3D models and how to light them in Game Maker’s rooms. 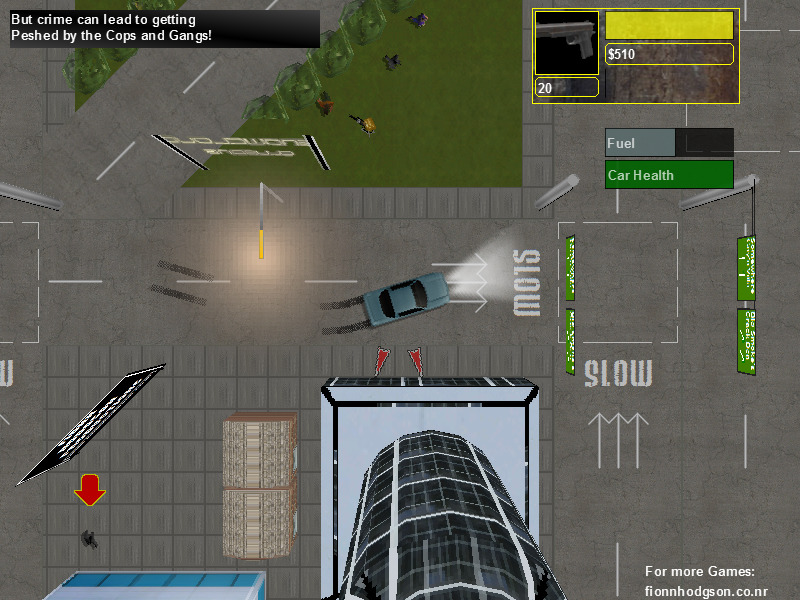 I decided to create Pliston as a generic dilapidated American city. I wanted to realise a memorable and detailed world. It was the first game I wrote proper radio station dialogue for. There’s 4 stations, each playing Pop, Jungle, House and Talk/Comedy. 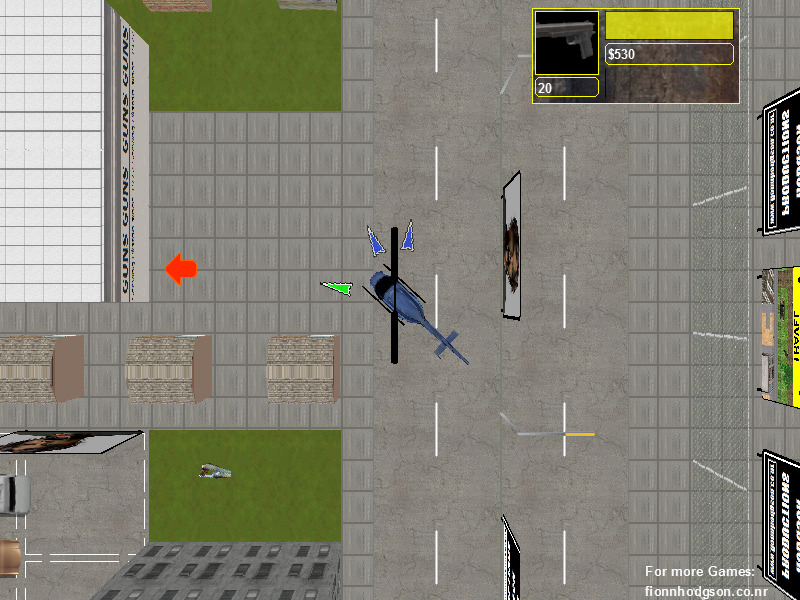 Pliston enjoyed some redistribution amongst the scene for a year or two. As I’ve released subsequent similar games, it’s rather obsolete. The jankiness of vehicle collisions and frequent glitches make it hard to recommend to anyone today.

Stardog - ‘The Slaves' Alliance’ is an arcade flavoured space combat game, kind of a spiritual successor to The Enemy Lines. This time I included full 360 degree movement and some different firing modes. 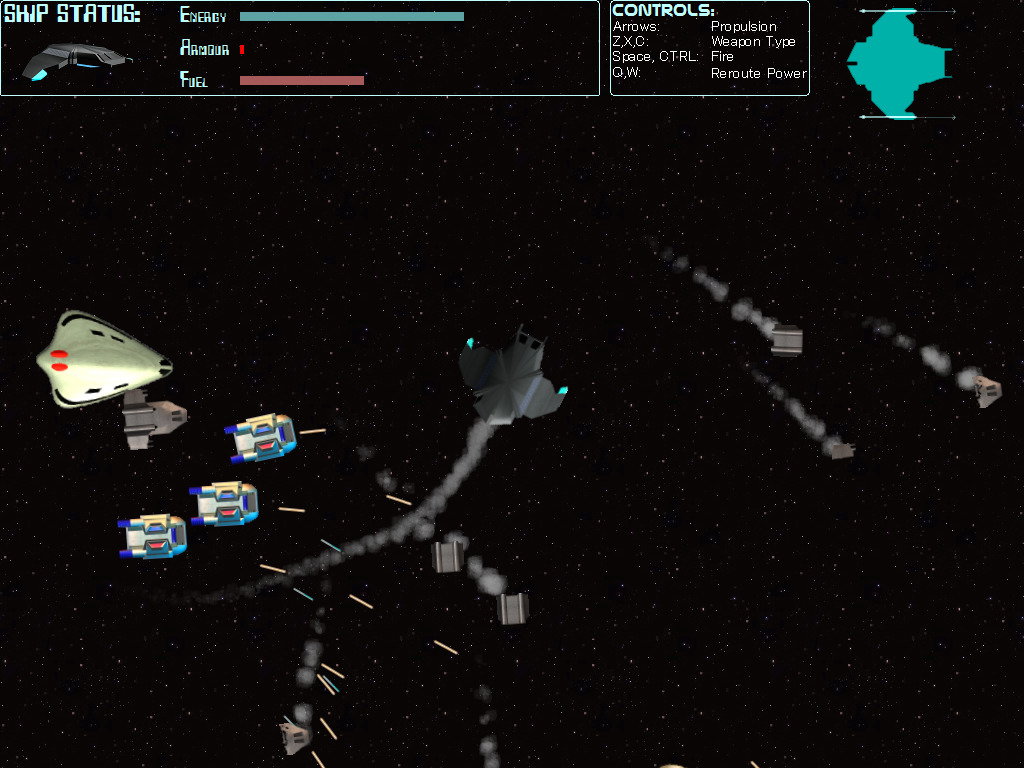 In this game, you get three health bars representing your energy, fuel and armour. You can reroute energy to regenerate your fuel and armour, although you’ll probably be too busy trying to avoid enemy laser fire. I quite enjoyed making this one as it was a quick and low effort project. The ship sprites were readily available from the same old models I’d made in TrueSpace 3. The music is all general MIDI renditions of early beats I made in Fruity Loops. I think it all took about 3-4 days overall to create.

I was really getting into electronic dance music by this time, and Neon served to show off my tunes, with a different song playing for each level. The game itself was designed like a classic arcade title: it was abstract, colourful and loud. 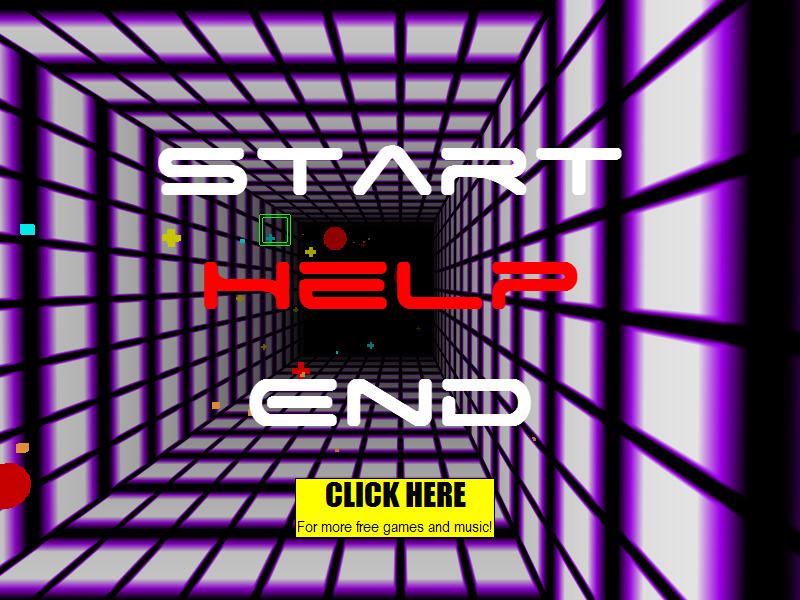 Neon takes place in an infinite 3D tunnel where you pilot a ship with the mouse avoiding and shooting at coloured enemy shapes. 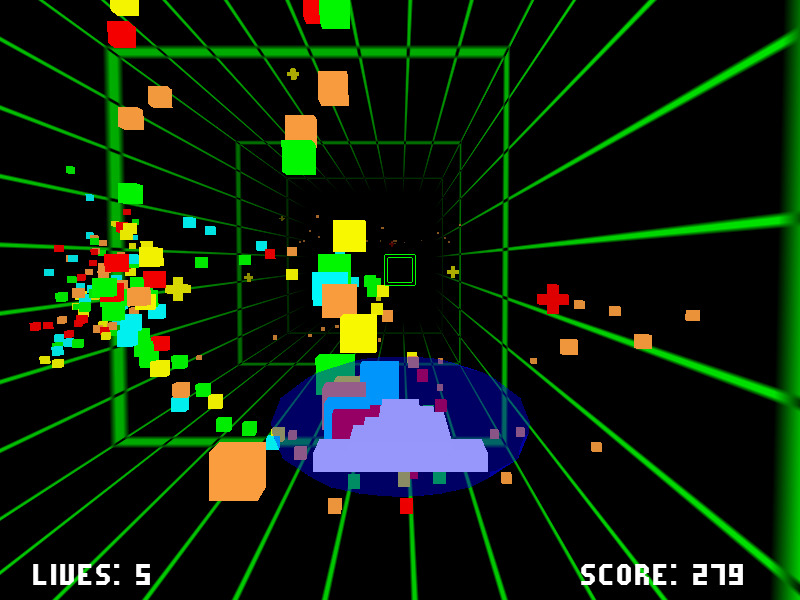 These days I get a headache trying to play it through to the end. The levels get progressively harder with various new obstacles and enemies. There are fifteen levels in total, and a jaunty tune plays at the end if you manage to complete the game. 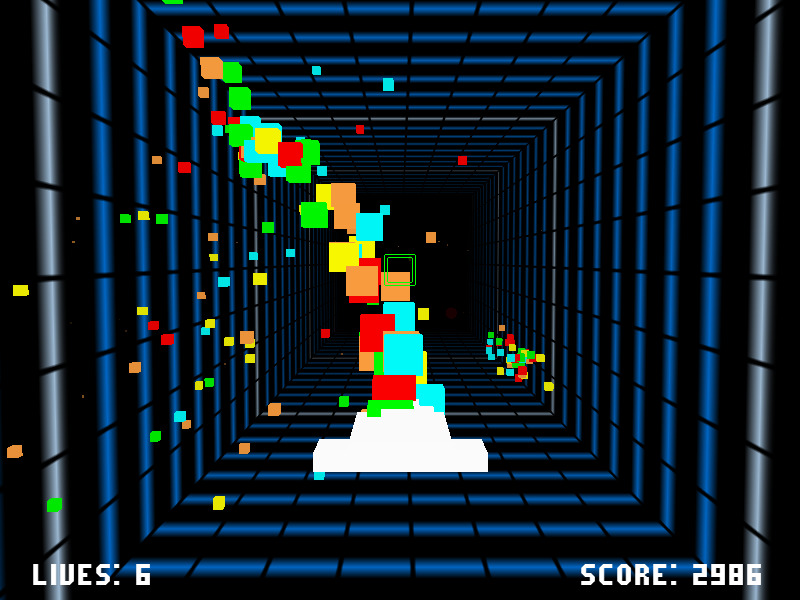 I casually worked on this Star Trek themed real time strategy game called Starfleet Operations. It was inspired by Flash Trek, Age of Empires and Star Trek: Armada. I eventually abandoned the project after about a year in order to focus on Total Anarchy 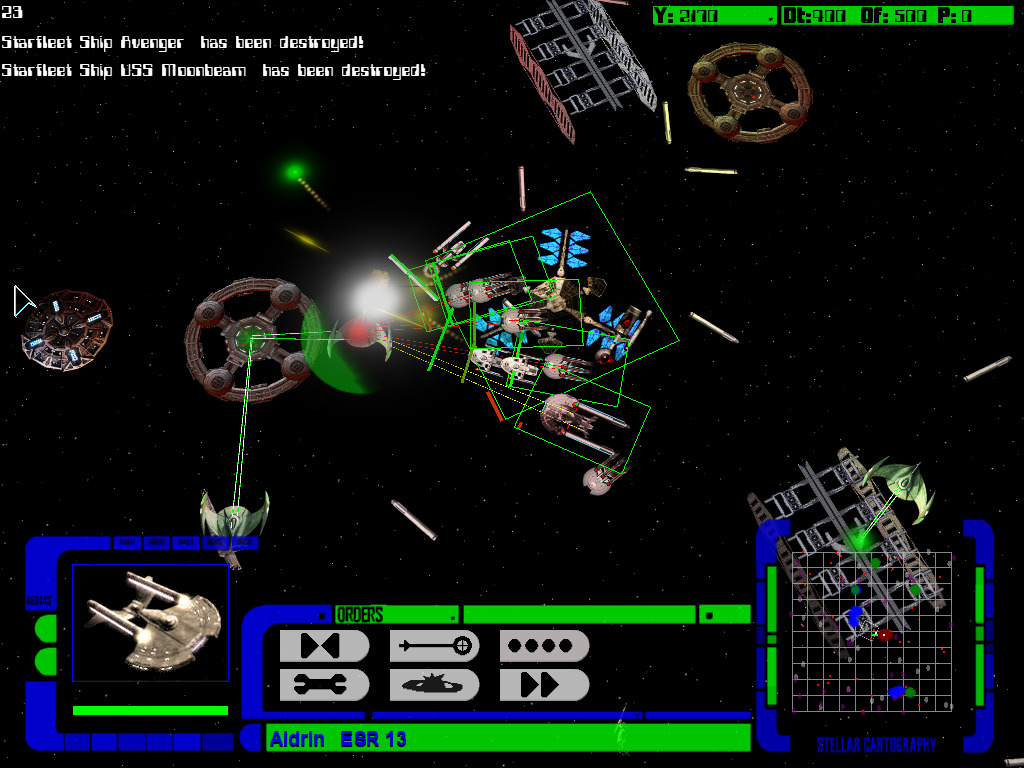 I had ambitious plans for this one: it was meant to stretch across 300 years of Trek history and include every class of starship I could think of. A lot of ground work was done on the RTS engine, which allowed ships to ‘level up’ to more advanced variants of their class as the years went by. 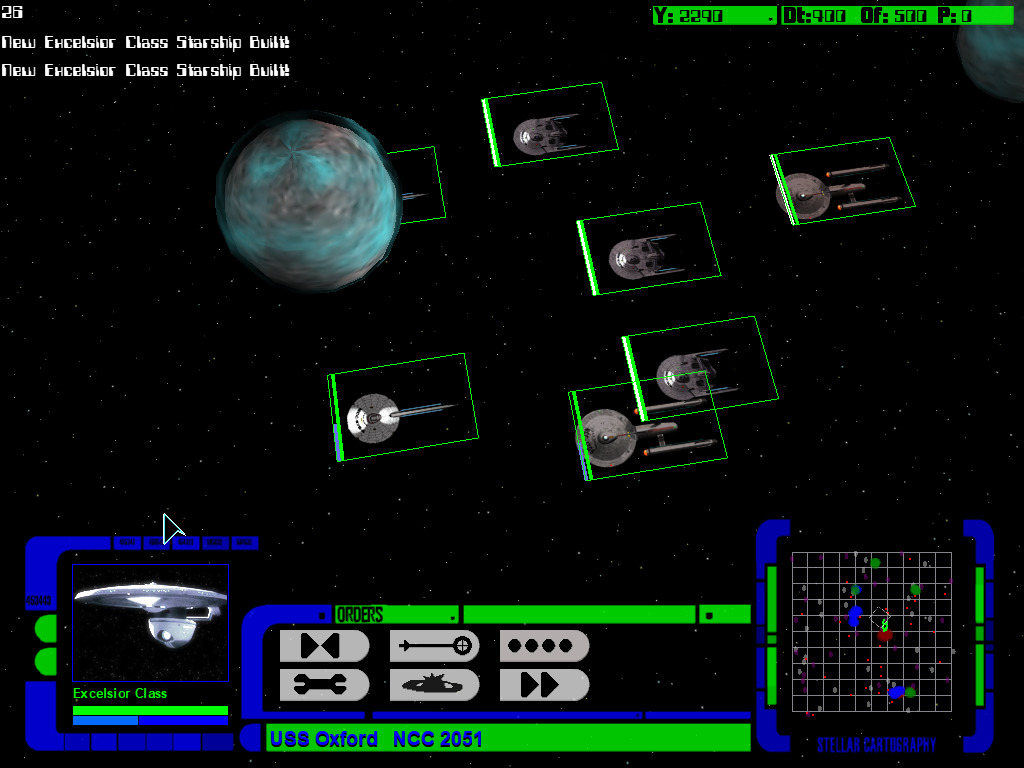 Many familiar Star Trek aliens would have been featured. I wrote code for the Borg, Romulans, Klingons, Gorn, Suliban and the Cardassians. The game is rendered in top-down 3D, by this point a favourite style of mine. In these screenshots, the ships are drawn as 2D sprites although I was toying with modelling each individual one in 3D. I got as far as doing 2 (the Constitution class and the Excelsior class) before I gave up and dropped the idea altogether. 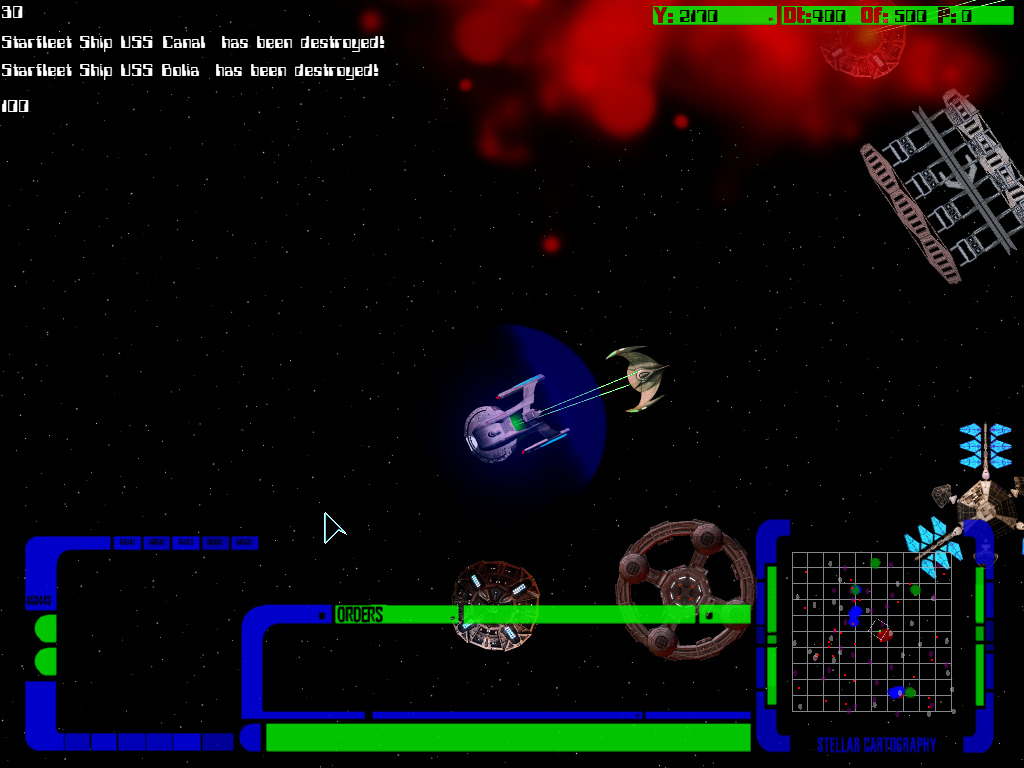 Fully 3D city simulators are plentiful today, but at the time I believed I could bring something unique to the table. Obviously inspired by Sim City, Utopia Unlimited was planned to be a combination of that and Jennifer Government: NationStates, allowing players to control the political landscape as well as building and zoning their city.

I got as far as making a reliable road tiling system and a basic economy model. I also set up some models for residential and commercial zones. I was particularly happy with how I managed to create the illusion of bustling streets complete with 3D traffic and pedestrians. 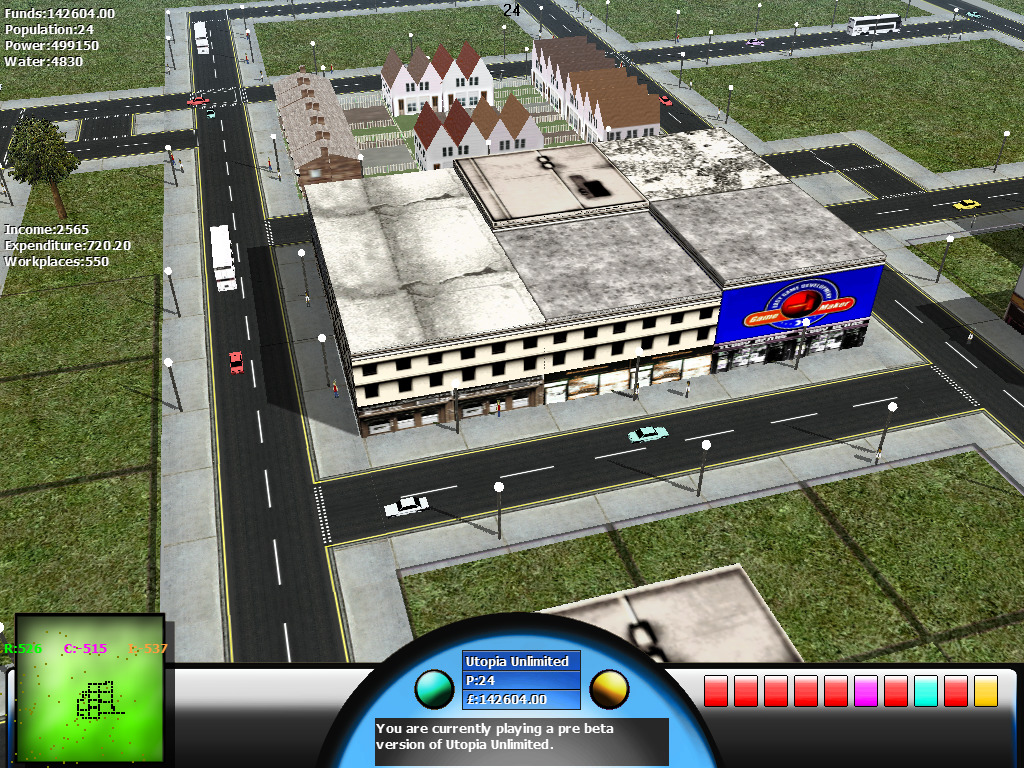 Unfortunately I wasn’t ever able to get this project over the line due to severe performance issues as soon as the cities reached a certain size. Perhaps I could do better today, but my programming skills were too limited to realise a game of such scale. 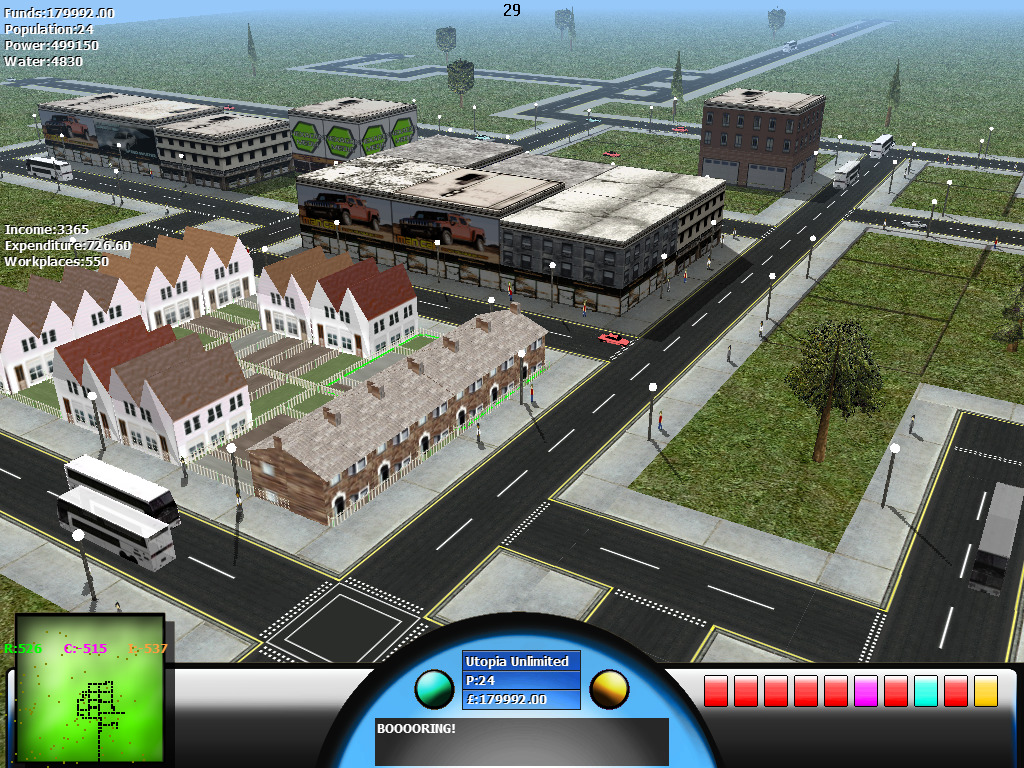 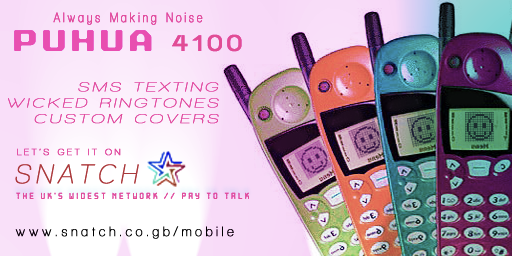