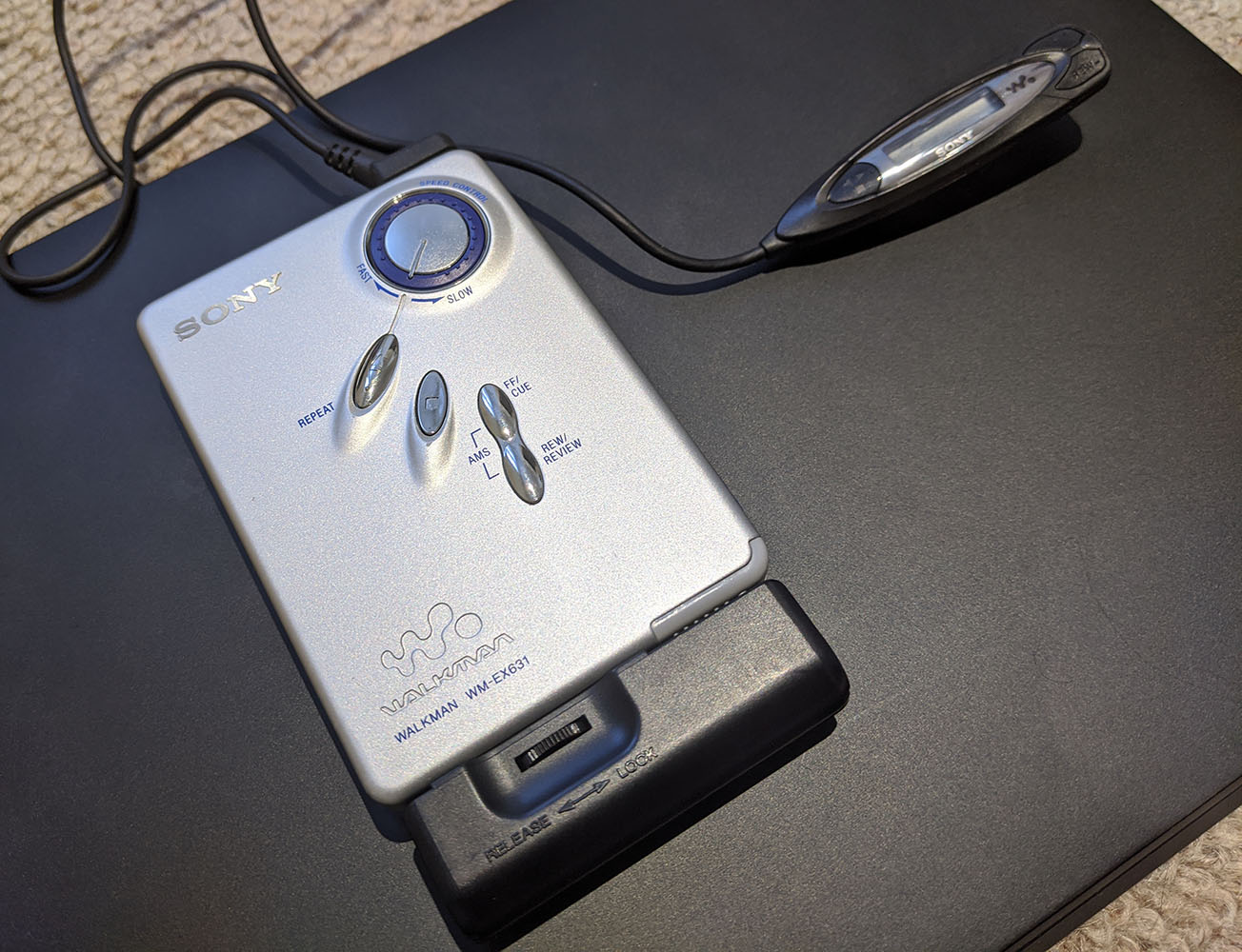 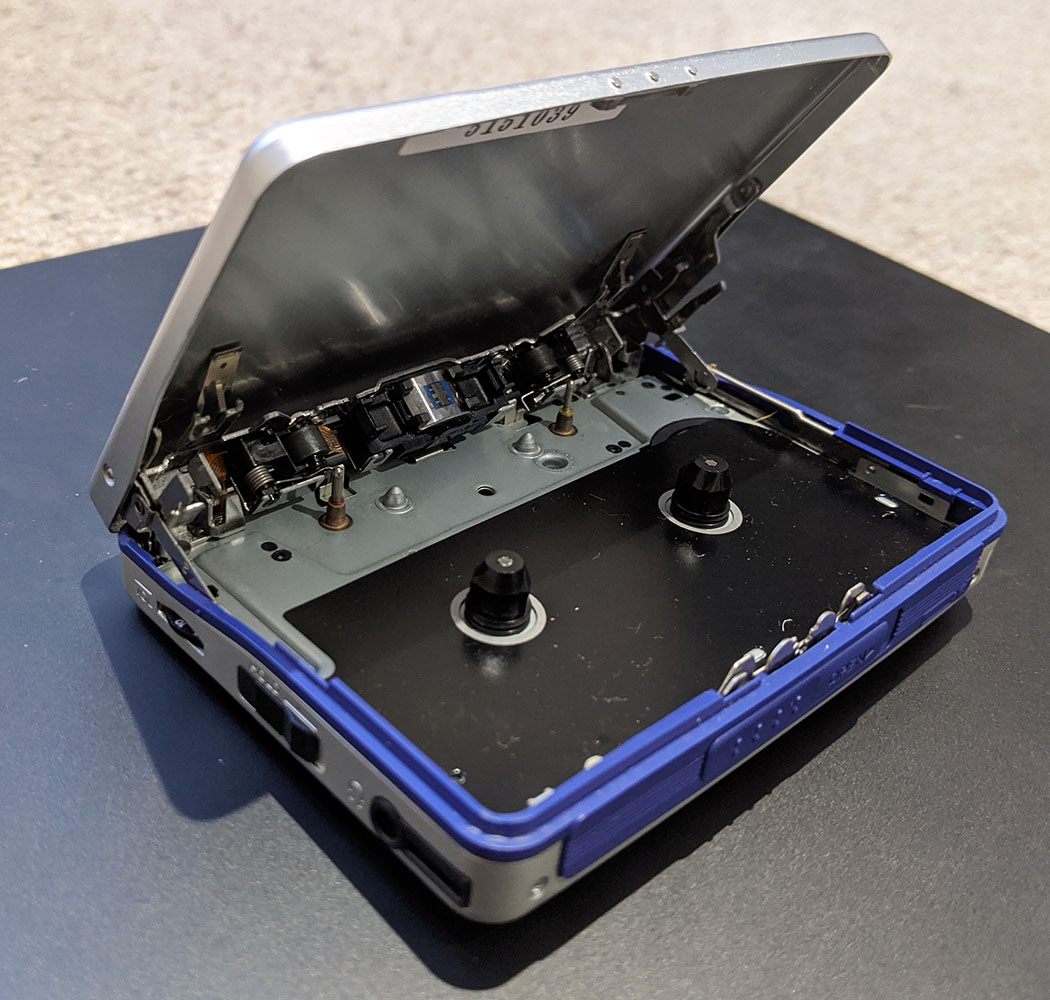 If you’re interested in starting to collect cassettes and want a portable player without breaking the bank, the WM-EX range is worth considering. Given that some of these were manufactured after iPods were a thing and cassette tapes were well on their way out, they’re more likely to be in good working order and won’t need the belts replaced.

This particular model was of great interest to me as it has a pitch control wheel that lets you alter the playing speed during playback. This is great fun for speeding up (instant Future Funk) and slowing down (instant Vapourwave) music and with two of these you could even start DJing using cassettes ;)

This Walkman can take a rechargeable ‘gumstick’ battery or can be powered using a single AA battery via the adapter. I prefer using an AA battery for convenience, and the adapter screws neatly to the bottom of the player without ruining the form factor. This device is a player only and doesn’t have recording or radio functions.

The amp inside the player is a little weak and this is noticeable when using big headphones. What’s rather annoying is it does have some EQ functions to make the sound more powerful, but these can only be controlled using the in-line remote control. If you lose the remote, say goodbye to ever using these features again. 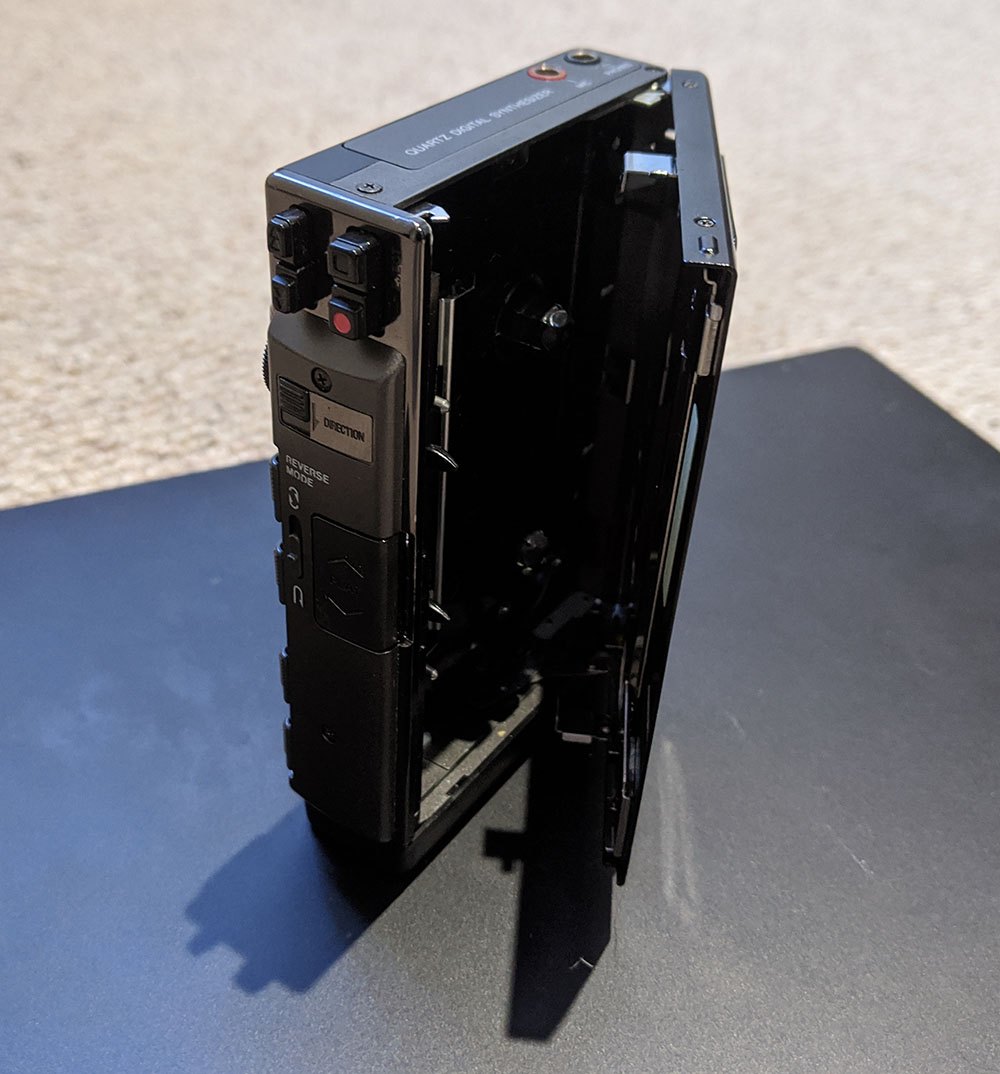 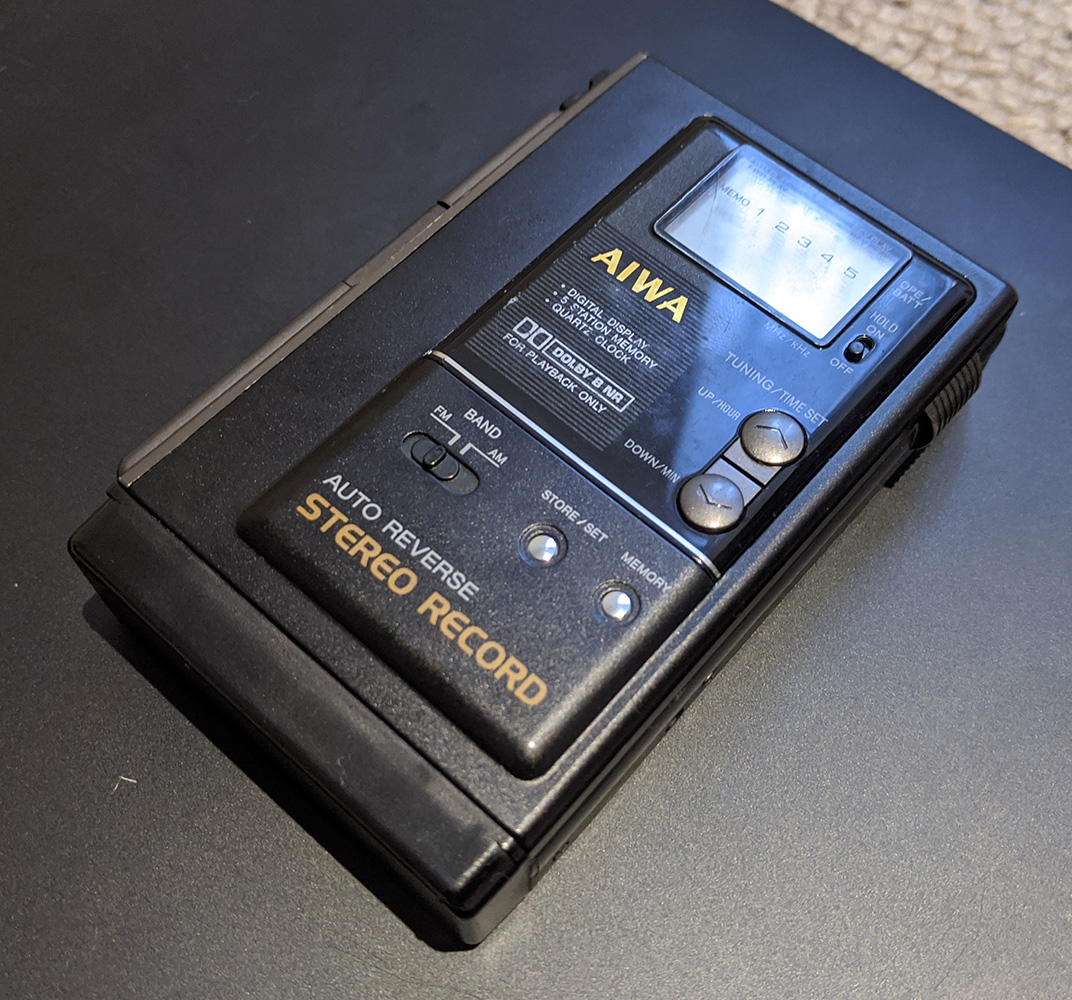 It’s a dinky metal black box that does it all - playback, recording and radio. In the ‘80s when Sony’s Walkman range was all the rage, Aiwa offered a cheaper alternative without scrimping on audio quality. Working Aiwa’s in good condition are harder to find these days, partly because you can’t recharge the lead batteries but also because they’re less collectable and iconic than actual Walkmans. I believe Aiwa were eventually bought out by Sony in the early ‘90s and the quality of their tape players suffered from that point onwards - so stick with the ‘80s models if you’re looking to buy an Aiwa.

I really like my J202. I bought it off a friendly German seller for a fairly steep price, but it had all the caps and belt freshly replaced and came with the handy adaptor for 2x AAA batteries. The adapter needs to dangle awkwardly from the DC-in jack for it to work, so it kind of ruins the aesthetic when actually in use.

For a portable player, the recording quality isn’t half bad. It’s a little noisy compared to an actual tape deck, but it’s in true stereo and preserves the frequency range of the source audio really well. Take a listen to my Aiwafunk Mix to hear how it sounds.

For listening to tapes, the audio quality is really nice. It has a powerful amp and produces a warm and punchy sound - particularly good for oldskool Hip Hop and ‘80s Electro beats. The radio tuner is decent, but it’s operated by early digital controls instead of a knob so tuning stations is a bit fiddly. The LCD screen is used for displaying the radio frequency or displaying the time when in tape mode. 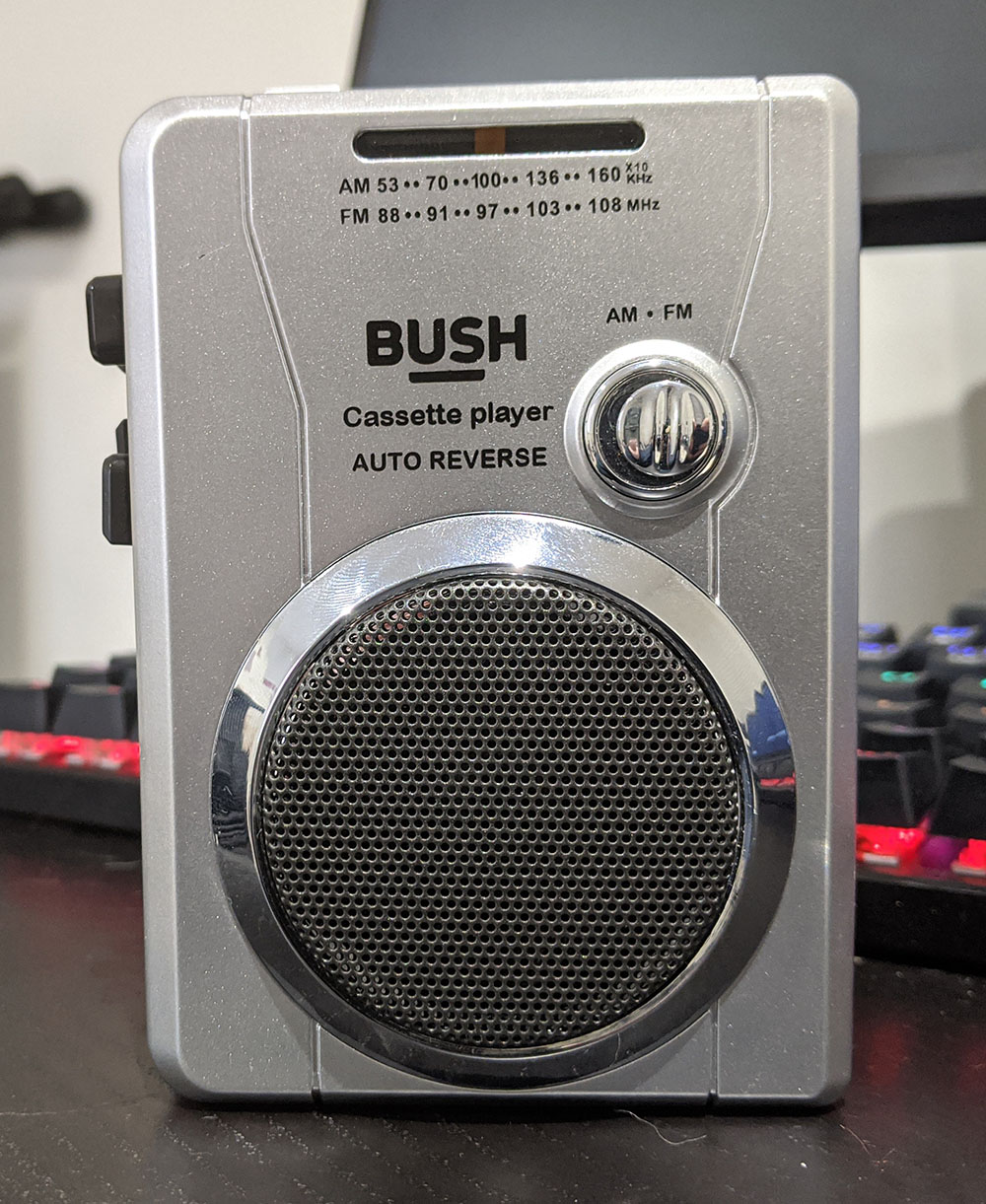 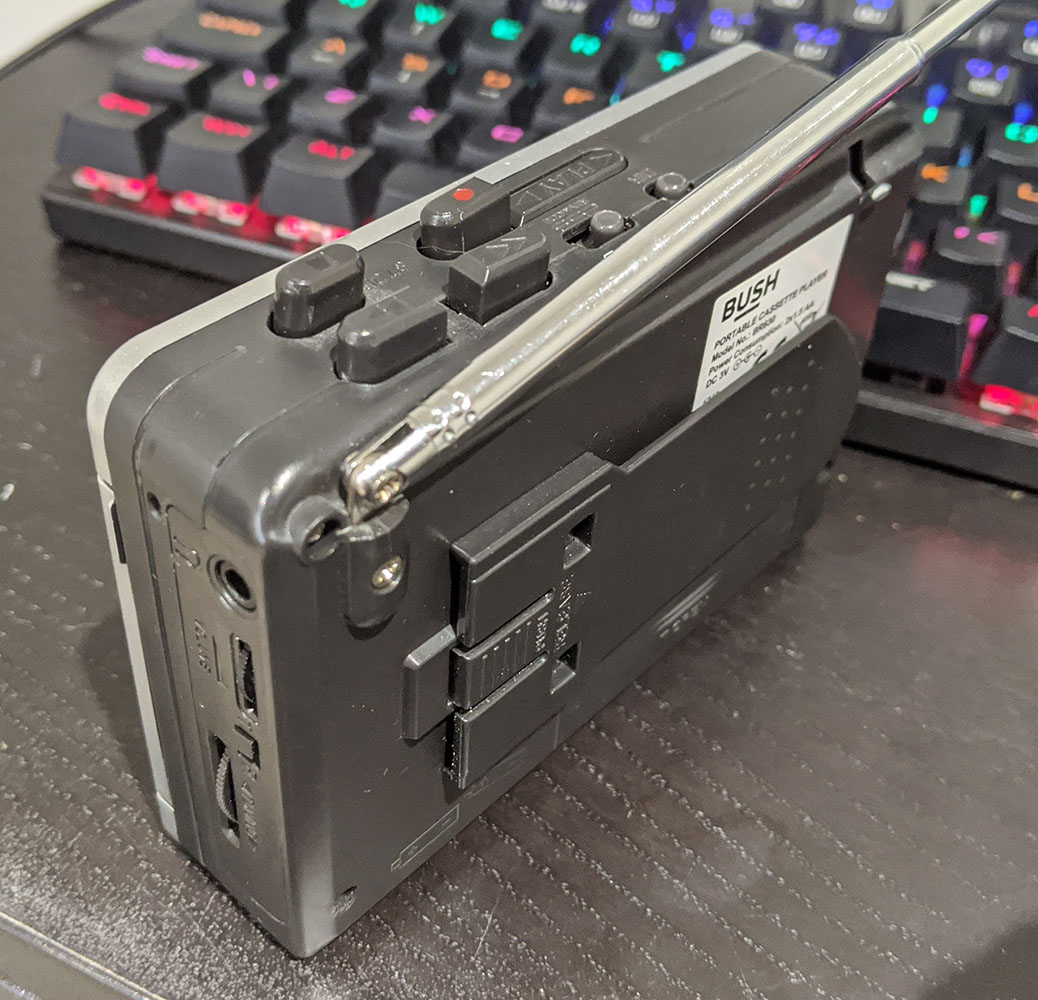 Bush branded electronics are exclusively sold by Argos - so I feel like calling this an Argos cassette player, or perhaps a ‘Sainsbury’s Basics’ walkman. You will often see these listed on websites like Ebay and Amazon, sometimes repackaged under different no-name brands. If you’re serious about listening to tapes, avoid these.

I tend to agree with Techmoan that this is a cheap and nasty piece of kit. It’s mono only and produces a horribly noisy and flutter-heavy sound. The AM/FM receiver isn’t particularly great, but it’s fine for listening to talk/news stations. It does have recording functions, but it’s best not to bother. It can only record directly from the AM/FM radio or using the in-built microphone. The microphone barely picks anything up except for gravelly noise and recording songs from the radio isn’t much better.

All that being said, with plenty of shade thrown - the BR-630 has still been a handy machine to have. Here are a few occasions where this humble player has served me quite well:

• While strapped for cash, I used it to make a romantic mixtape for a Valentine’s day gift.
• I took it to Boomtown festival as a portable radio that I wouldn’t mind getting damaged, lost or broken. And it survived without any complaints.
• Our internet went down at some point during 2019 when the Brexit shenanigans were in full force. Without TV or the internet to listen to the news, this thing came to the rescue. 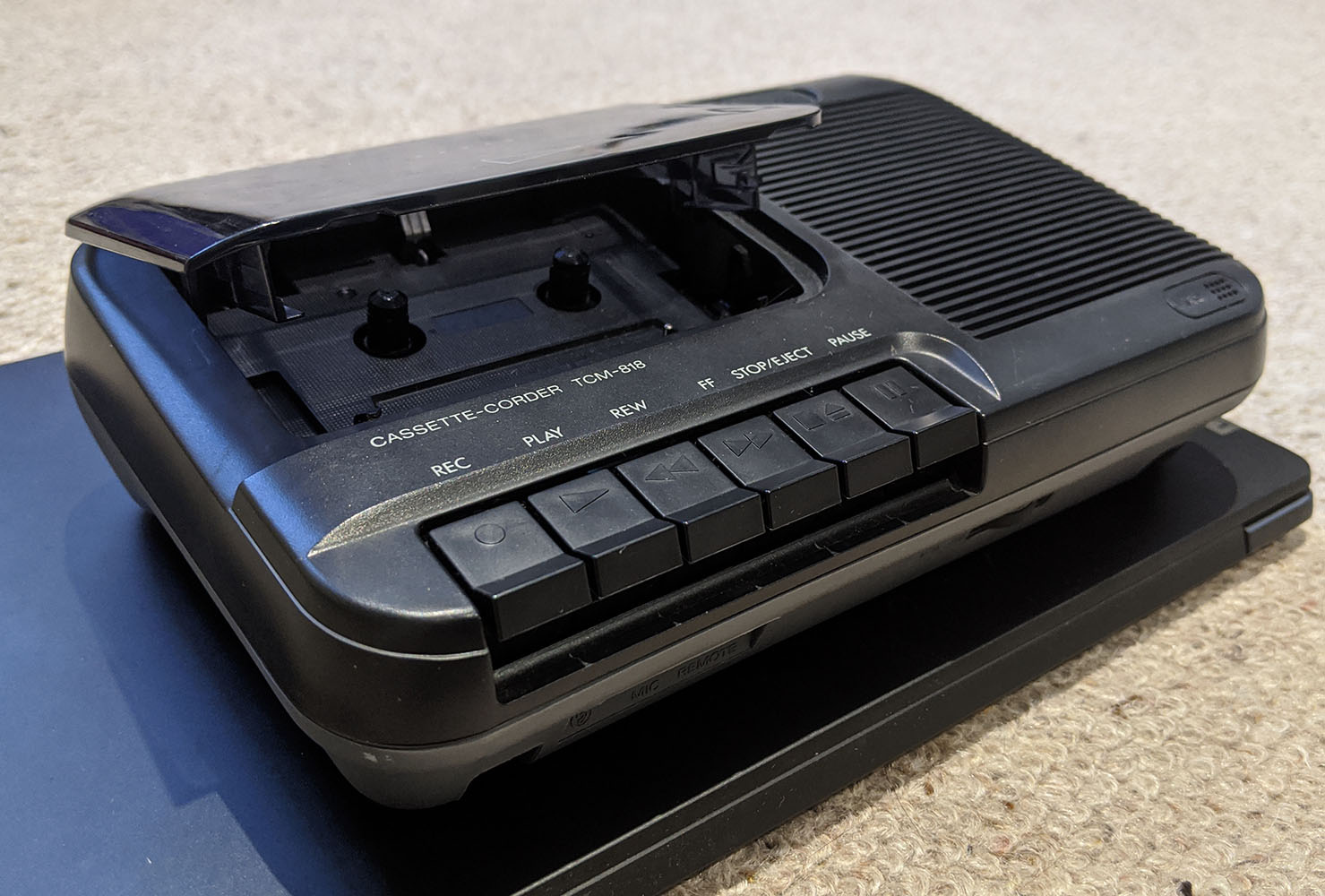 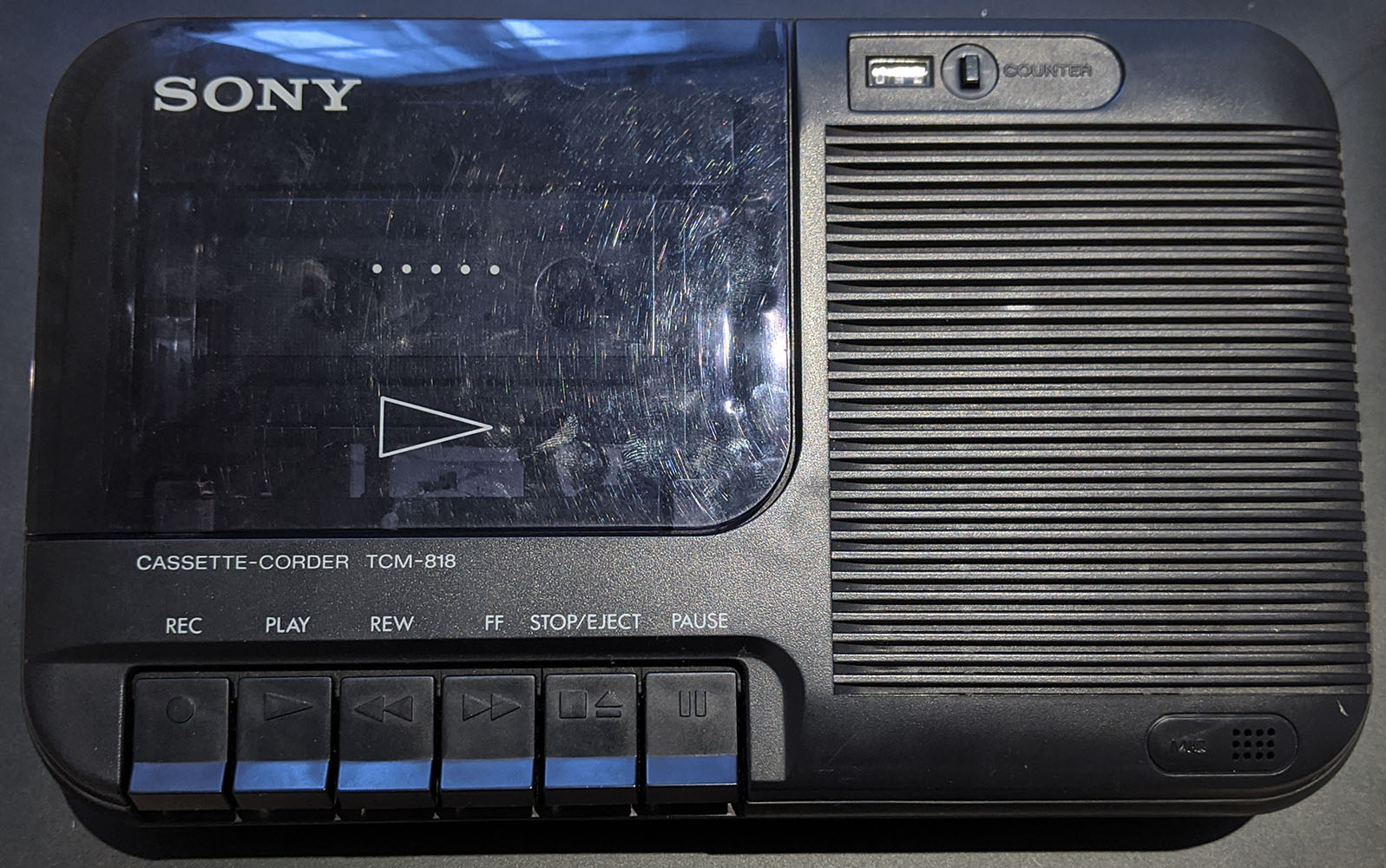 Basically a shoebox tape recorder in a horizontal form factor. This plastic beast serves as a long lasting, fairly durable and easy to use sound recorder.

It’s mono only, in both recording and playback. It has an in-built loudspeaker which puts out a surprisingly decent quality sound even for music listening. I find this machine quite useful for hot swapping tapes - for instance when organising tape collections.

Actually, don’t even try plugging in headphones as it only outputs through the left channel. It does have a remote-in for external microphones to stop the mechanism at the touch of a button. This could also be useful for interviews or recording meetings. You can also use the microphone jack as an aux-in if you don’t mind making mono recordings.

This was an ebay purchase when I was looking for a cheap device for recording to tapes. Probably due to its age, it has an annoying mechanical squeak when playing or recording a tape. This means that recording audio using the in-built mic picks up too much noise for any practical use.